Monsters of the Past

When I was 8 years old, I was given a book that so terrified that I eventually had to beg my mum to throw it away. That book was Monsters of the Movies, by Denis Gifford. I got it through the Puffin Club at school, the same club which gave me You're A Good Sport Charlie Brown, Wombling Free, Tarka the Otter and the Crack-A-Joke Book. And despite not owning that book for about 40 years, it has left a lasting impression on me. 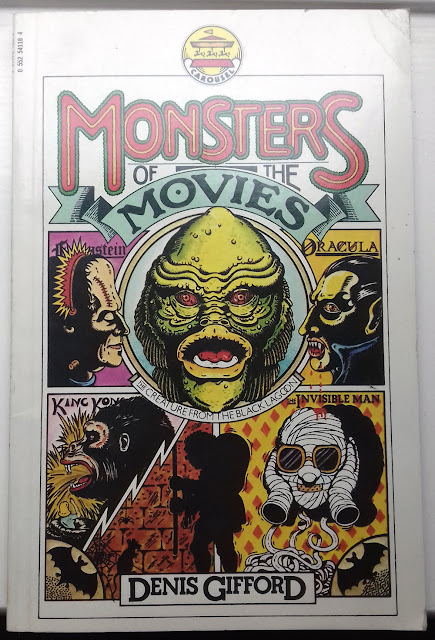 Monsters of the Movies was a slim paperback with a jolly colour cover aimed squarely at kids, a sort of A-Z of random movie (and TV in the case of the Munsters) fiends, freaks and horrors, featuring an iconic black & white photo and a short text piece on every page. The selection was somewhat random (The Manster, anyone? The Blood Beast Terror?) and didn't limit itself to the predictable Universal/Hammer big guns, but I wasn't to know that at the time. As far as I was concerned, B-list vamps Barnabas Collins and Count Yorga got their own entries, so they must have been as big a deal as Dracula himself.

Specifically, it was page 94 that scared me so much I couldn't even bear to have that book in the house. Page 94 was The Zombie, featuring a picture of a grinning ragged cadaver sporting petrifying white eyes with tiny pinprick pupils. Awful. Just awful.

Many years later I would unexpectedly discover that the picture was taken from Hammer's 1966 film Plague of the Zombies (the one set in Cornwall where an unscrupulous toff uses voodoo to resurrect the local stiffs to toil in his tin mine. Ah, the old 'zombie tin miner' storyline, how often have we seen that tired trope). The zombie in question, as I recall, has the distinction of emitting a manic undead cackle before menacing heroine Diane Clare, though I could be mistaken as I was experiencing a full-blown scarred for life flashback at the time and hiding behind a cushion.

Anyway, it took some dogged googling today (you try searching for 'monster' 'movies' 'book' and 'puffin' and see how far you get), but I've found a second-hand copy of the long-shunned book on ebay and now have 7-10 days for it to arrive in the post, whereupon I intend to face my fears and take page 94 on once more. Wish me luck.

Incidentally, the artwork on the cover has a familiar style. Could have been Denis Gifford himself but it doesn't look like his style. Reminds me of Gary Chalk, of Lone Wolf and Talisman fame. Suggestions welcome.