Oh Hello!
Five @ Assembly George Square Studios
Jamie Rees returns in a tour de force performance as Charles Hawtrey, one of the leading lights of the Carry On film franchise. Hear of his hilarious run-ins with Kenneth Williams, his disdain of the Carry On film producers and his complex relationship with his senile mother.
The Ocelot says: Given the subject of the one-man show, yet another flawed and tragic British comedy actor, this was never going to be a barrel of laughs, but Jamie Rees turns in a spot-on performance as 'the other one' from the Carry On films, and he does a fair decent Kenneth Williams too. My only problem was with the venue - as with the Nosferatu show, both performing area and seating were on the same level, so sitting a few rows back, I was hard pressed to see the actor when sat down. 4/5

Dusty Horne's Sound and Fury
QueenDome @ Pleasance Dome
It’s 1963. The pioneer of cinematic sound, Jack Foley, has inspired a generation of great ‘foley artists’. Dusty Horne is not one of them. Nevertheless, Dusty will attempt to join the pantheon of celluloid greatness by revealing the secrets of her craft, before a live audience.
The Ocelot says: Wasn't sure what to expect from this, but I'm a sucker for live sound effects and movie memoirs, even fictitious ones. Natasha Pring plays Dusty Horne as equal parts Norma Desmond and Delia Darbyshire, a self-professed god of sound effects, forgotten and eclipsed by the real-life Jack Foley. She looked and sounded great, as did the many foley effects she created before us. The live smashing of a water-melon was particularly explosive, and I enjoyed the clips from various old movies too (especially the giant moon spiders). Some very jolly mass audience participation, as we helped recreate a memorable scene from Hitchcock's The Birds (I kept the glove afterward, sorry). 5/5

Remains of Tom Lehrer (Performed by Adam Kay)
Wine Bar @ Gilded Balloon Teviot
From pigeon poisoning to masochistic tangoing via the periodic table, Tom Lehrer’s satirical songs are revisited and reimagined by award-winning musical comedian Adam Kay.
The Ocelot says: I'm not a massive Tom Lehrer head, but that's mainly just down to ignorance of his songs, though I do know The Element Song. Adam Kay plays and sings a good selection of his works both famous and obscure, as well as updating and adapting some for modern, British ears. I think I kind of expected him to do it all in a Tom Lehrer voice, but it's not that sort of show. You gotta admire Lehrer for retiring from public performance at his height, and for being so splendidly popular yet subversive all that time ago (I'm thinking particularly of the Masochism Tango). I think I would have liked to have seen a collaboration between Lehrer and Dr Seuss. Can someone sort that out for me please? 4/5

Kill the Beast: He Had Hairy Hands
Pleasance Two @ Pleasance Courtyard
The year is 1974, the town is Hemlock-Under-Lye and when werewolf attacks threaten teatime, there's only one person you can call...
The Ocelot says: ...and that person is paranormal-obsessed detective Eglantine Whitechapel. This is a highly-polished comedy adventure delivered with grotesque surreality by the Kill the Beast writer/performers. Very well choreographed, some dashes of Boosh-like weirdness, nice back projections and a lot of laughs. I especially liked the wolf-effects at the end created as a group effort using gloves, bits of fur and two small torches. Splendid stuff. I quite fancy seeing their other show Wake the Damp too. 5/5

Loud Poets
The Netherbow Theatre at Fringe @ Scottish Storytelling Centre
This is slam style, make some noise, fist-thumping, pint-drinking, side-tickling, heart-wrenching poetry. This is poetry for the masses. This is the spoken word revolution.
The Ocelot says: Herself and CJ went to see this without me. I was too busy watching Milo McCabe (see below). But they seemed to like it. As you may know, the Ocelot does not willingly submit to poetry.
Herself says: The boys were OK; the girls were sublime. 4/5

Laughing Horse @ City Cafe
Homeschooled by an overly nostalgic mother, Troy confronts the 21st century as if waking from a 1930's time capsule... with insightful and hilarious consequences.
The Ocelot says: Thanks to Kill the Beast overrunning, I had to peg it from the Pleasance to the City Cafe for this free gig but made it with minutes to spare. I do enjoy Milo McCabe's character Troy Hawke; he looks like George Valentin from The Artiste and sounds like a fruitier version of Robert Donat from The 39 Steps. Not entirely sure the audience got the vibe of his show, which is essentially that innocent 30's throwback Troy inadvertently gets into and out of scrapes in modern Croydon, but I certainly enjoyed it. And he has the best jawline/soupstrainer combo at the Fringe. 4/5 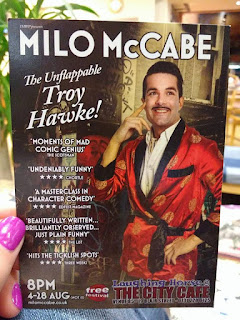 Norris & Parker: See You at the Gallows
The Attic @ Pleasance Courtyard
Their hotly anticipated second debut hour. A sordid soiree full of wild, dark and ridiculous sketches, characters and songs woven within a narrative of underlying aggression between Norris & Parker themselves.
The Ocelot says: Good double-act stuff from N and P, who we have seen before, this time accompanied by deadpan Alan Moorish keyboardist Kristoff and foul-mouthed techie Steph. Some nice singing from one of them, and (intentionally, I think) less tuneful singing from the other. A little audience participation and a bunch of fun, silly, very physical sketches, all bravely performed in black leotards. I thought the periodic digressions into topical political comment didn't sit all that well with the rest of the show though. 3/5

Pokemon Ho!
Frooty Goose @ OpenSpace
A full-participation late-night, live-action adaptation of the game that conquered the world. Stalk the streets of Edinburgh old town at night, seeking out elusive actors in full-size Pokemon bodysuits and 'catch' them with special foam balls. For teams of 3-5 adults.
The Ocelot says: Quite an exhausting way to end the night, as the three of us ran and dodged around the Royal Mile after midnight, hunting down human cosplay Pikachus, Squirtles and Charmanders. I myself had quite the game of cat and mouse with a 16-stone Jigglypuff who was surprisingly quick on his feet around the back of the Radisson Blu. 5/5

Quirky incident:
So I'm making my breakfast porridge and without thinking, I absent-mindedly preload a tablespoon with Lyle's (what the feck ever happened to Tate?) golden syrup after putting the bowl (actually a glorified plate) into the microwave. Way too early. What the hell do you do with a loaded spoon of slow-dripping syrup? There is literally nowhere to put that mofo. Except back in the syrup tin as CJ later pointed out but let's say that I didn't think of that.

So I am left with no recourse but to continue twirl the spoon round and round and round for the entire duration of the porridge microwave cycle. And given that I have to take the bowl (actually a plate, did I mention that already?) halfway through and give it a stir, I can't use the spoon I already have because that would contaminate both items before their time, I have no recourse (again) but to stir the bowl with my finger, all the while twiddling my syrupy spoon in the other hand. It was quite a sight. 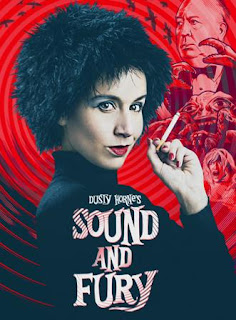