Big Bite-Size Breakfast Show
QueenDome @ Pleasance Dome
Good morning Edinburgh! Three funny, eccentric, thought-provoking menus of Bite-Size Plays with free coffee, croissant, strawberries!
The Ocelot says: Horribly early (for us), but very well worth it. My thanks to friends Gordon and Anna for the anniversary gift of a Fringe voucher which we spent on this. Had no idea what to expect as we plodded into the Pleasance Dome with a lot of old people (it was way too early for the under-30 Fringe crowd), and were handed tea, coffee, croissant and a single strawberry, all of which made shuffling into the auditorium and sitting down extra perilous. What we got was six short scenes, varying from outright comedy sketch (Chugging for Kittens) to grim, twisty drama (two-man prisoner thriller Broken). The mood change between scenes is sometimes a bit jarring, but it's certainly an excellent showcase of the range of the Bite Size Plays cast. I rather liked the kidnappers/pineapple sketch and the Hamlet was gay sketch. They cycle through different 'menus' of sketches every three days, so conceivably you could go three times. High quality, good value for money. 5/5

Escape from the Planet of the Day That Time Forgot
Downstairs @ Assembly Roxy
A professor with a rocket in his cellar, his female ward and his eager assistant – together they find themselves on a distant planet before escaping to... where exactly?! A new British B-movie inspired affair, with sinister plant life, Norse gods, time travel, dinosaurs and a whole pile of pluck!
The Ocelot says: Once again indulging my love of Gavin Robertson shows, this is far closer to Fantastical Voyage and Thunderbirds FAB than the psycho drama of The Six Sided Man (also on this Fringe). With a three-person cast, there was more variety of characters, as the professor (Robertson), his female ward (Katharine Hurst) and Geordie assistant (Simon Nader) fly into space in an ironing board rocket (good prop work) and encounter Triffids and evil Norse gods before escaping back in time. A little light of pace and in need of a better climax (the third act with the dinosaurs feels like a separate episode and ends on a non-cliffhanger), but the vocal and physical work was excellent. Good use of the stacked grey boxes as fortresses, tunnels, talking walls and space helmets. My favourite performances were Simon Nader's Shatnerian Loki and the entire cast's prowling dinosaurs. 4/5

Erin McGathy: Love You Loudly
Ballroom @ Gilded Balloon at the Counting House
Erin McGathy (This Feels Terrible, Drunk History, Community) presents a comedy show about love, guts, despair and wearing wedding dresses covered in candy for approval.
The Ocelot says: I'll admit I put this on the list purely because of Harmontown, the podcast in which Erin McGathy makes a semi-regular appearance as TV creator Dan Harmon's girlfriend and then wife (and now ex-wife). Though billed as comedy, this painfully honest (see the period/sex/bedsheets story), personal show bravely recounts various disastrous relationships in which she sometimes emerges as the archetypal crazy stalker girlfriend and sometimes as a damaged person in need of a hug and a good therapist. It has a happy ending though, so fingers crossed that this, her first Fringe show, will not be her last. 4/5

Driftwood
Palais du Variete @ Assembly George Square Gardens
In this colourful and turbulent concoction of pure joy and intimacy, watch Casus bring a blank canvas to life and reveal our innate need for human contact. This is a circus show that does not let you forget that to feel is to be human and in a moment of danger, a grasping hold is survival.
The Ocelot says: I do like a good bit of physical acrobatic stuff, and the spiegeltent in George Square is the perfect venue to see this 5-person troupe of superb athletes use each other in a variety of breathtaking stunts/dances/exercise (I'm not sure what the right term is). And my word they are strong, lifting each other up three people high, swinging and catching each other, twirling from the trapeze and generally looking like the sort of humans you'd offer up to visiting aliens as a justification for our existence. I also liked that one of the women did as much of the heavy lifting as the larger chaps. You go girl. 5/5

Alexis Dubus Verses The World
Voodoo Rooms
Winner, Chortle Award 2015. More lyrical tales from the road mixed with iffy wordplay and first-rate bullshit. 'Does what great stand-ups do but does it in verse... Uniquely funny' ***** (Scotsman).
The Ocelot says: A bit like his spoken word show Cars and Girls from a few years ago, this is Alexis out of Gallic Marcel Lucont mode and appearing as himself (albeit in a green velvet suit), the guy from Great Missenden spinning rhymes and tales from his travels around the world. Charming and funny. I'm glad we were able to persuade CJ to come along to the Voodoo Rooms with me and give him a go. Looking forward to getting the CD of the show. 4/5

Dave Lemkin: The Village Hall
Ciao Roma
Lower Swell is having its summer festival! Come and be a part of the village as character comedian Dave Lemkin brings to life all the guest speakers: Colin Jackson, a self-employed management trainer (a former manager himself until a staff mutiny made his position untenable), Jaqueline Dulay, who you all know as the village's yoga teacher who leads a meditation on spirituality and overcoming violent thoughts, and finally local celebrity, former Tory bigwig, the Rt Hon. Dickie Daventry.
The Ocelot says: A bit more character comedy for us, this time underneath an Italian restaurant of all places. A late start didn't help, and the comedy caretaker who ushered us in was probably a bit too broad. But I enjoyed the rest of Dave Lemkin's characters to one degree or another, and couldn't help but go aaah when he brought his little cockerpoo puppy in as Dickie Daventry's dog Thatcher. Some of the costume changes were a bit too long, but the end results were pretty good (especially for Daventry). Amusingly/awkwardly, an entire row of old people left during the rude vicar section, citing not feeling well, though I suspect that they left due to the show being not as cosy as they had been led to believe, a perennial problem with comedy shows that perhaps don't make their adult content plain up front. 3/5

Shadows Over Improv
The Frooty Goose @ Billy Connolly Memorial Theatre
The H P Lovecraft Improvisation Players put on a different sanity-stretching play every day, with suggestions from the audience. "A tentacular spectacular!" (shitsngiggles.com).
The Ocelot says: This evening's show at the gloomy BCMT was attended by a strange mixture of freaks and fools, ourselves included. Tonight's set-up from the audience was a setting (Peckham), an academic (a Business Studies lecturer) and a strange item from outer space (I shouted out 'kettle' but they heard it as 'cattle'). Thus we witnessed the strange tale of cows from the stars infiltrating the Peckham city farm, their peculiar coloured milk turning all who drank it mad. The improvised play ended with a dark ritual conducted at Brockwell lido to summon a bovine elder god from its depths, thus retroactively titling tonight's story The Call of Cowthulhu. 5/5

Axis of Awesome: Won't Ever Not Stop Giving Up
Debating Hall @ Gilded Balloon Teviot
Jordan, Lee and Benny are back with a brand new hour of world-class musical comedy. They've toured all over the earth and their videos have over 200 million hits online. They've even got a plaque from YouTube. A plaque!
The Ocelot says: We went to see this on the strength of their Four Chords song which we saw on YouTube. And what a great way to end our week at this year's Fringe. A packed enthusiastic crowd, great comic music and just a lovely vibe. I will admit unapologetically to being extra interested in seeing how lead man turned lead woman Jordan performed, and also how she was treated by fellows AoA members Lee and Benny and by the audience. She looked great, sounded great and got a lot of love from everyone. Hurrah for Jordan! Transitioning publicly used to be a horribly intrusive, traumatic experience, but thanks to brave people like her (and her friends being super cool), it makes it more normal and easier for other folks. Check out their song The Elephant In The Room for a guide to what is and is not acceptable to ask a trans (sorry, bald) person. I got their latest CD and a very rare (I hate photos of my stupid face) photo of me and the band afterwards. 5/5 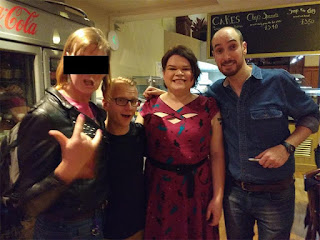 Quirky Incident
I did an awesome forced march from the George Square (one of the more southerly venues) to the Voodoo Rooms (in the north) in about 30 minutes, and even had time to get a slice of yummy pizza from the Udderbelly square on the way (actually not on the way but I really wanted that pizza). In the rain too. I am some kind of a walking god/goddess/gender-non-binary deity.

Finally
OK, that's it. EdFringe 2016 over for me, Herself and CJ. My thanks to guest stars Ian, Mitchell, Clive, Paul, Laura and James. I promised not to go on too long and failed, as we all knew I would. Hope you liked the crappy reviews, stupid made-up shows and tolerated my timid criticisms and gushy gushings. Till next year, or maybe not.