Long day today with many many shows, so bear with.

Elsa Jean McTaggart: Sings, Strings and Other Things
Theatre 3 @ theSpace @ Surgeons Hall
Take songs that stop conversations, a voice that could stop wars and a fiddle that stops at nothing, and you have the icon Elsa McTaggart. The show consists of original compositions of traditional style... lively jigs, reels, hornpipes, airs etc, played on the fiddle and whistle.
The Ocelot says: She's like a lovely smiley middle-aged fairy. Plays fair decent electric fiddle and accordion though I always think that the accordion lends an unwelcome French tone to any tune played thereon (see the omnibus edition of Les Archers). Very happy and uplifting. 4/5

Clover @ Underbelly Med Quad
Armed with a cast that despises him and a slim budget, actor, writer, and director George Vere endeavours to bring you his debut sci-fi masterpiece. An intergalactic comedy farce from Willis and Vere.
The Ocelot says: Sub-Trek space opera from Willis & Vere goes rapidly off the rails and off script amid directorial ego trip. Splendidly low budgets effects (binbag black hole into which the posturing Captain Harrison is sucked arse-first) and fast-paced farcical antics. A touch of The Play That Goes Wrong with a fuck-ton more swearing. Herself was roped into to delivering some lines when certain cast members had bogged off, which she did with verve and gusto. 5/5
Herself says: Captain Harrison's tights were so tight you could tell he wasn't circumcised. 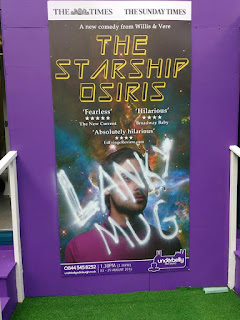 A Little Bit of What You Fancy
Frooty Goose @ The Launderette
Sid Little's tell-all account of life in the shadow of a star. Hilarious but touching in all the right places. Sid will be signing copies of his Sid Something Simple album after the show.
The Ocelot says: I now know things about Eddie Large that nobody should ever know. On the other hand, Sid's unexpected rendition of Gangster's Paradise was a delightful revelation. 3/5

Jules Verne’s Extraordinary Voyages: 20,000 Leagues Under the Sea
studio 7 @ C venues – C nova
We know more about the Moon than we do about the ocean floor. Dr. Arronax, scientist and pioneer of underwater exploration, is determined to discover what secrets may be hidden beneath the waves.
The Ocelot says: One of three Verne stories being staged every days by Not Cricket Productions in the same space right at the top of C Nova (where we saw the Frontier Trilogy last year). Very very minimal set - some muslin sheets and back lighting, but excellent physical acting to convey being tossed about on the Nautilus etc. The character of Prof Arronax was gender-flipped which was fine, but the actress delivered every line with the same blinky grin and the simpering tone, whether she was commenting on the facilities of her cabin or pleading with Nemo for their lives. Nemo was jolly good, as was Farragut and Ned Land. The squid tentacle was unexpectedly hilarious. 4/5

Dracula
main house @ C venues – C too
There can be no redemption for Jonathan, no hope for Mina, while the Count draws near. With stunning physicality, Push to Shove’s wordless adaptation exposes the darkest desires of Dracula’s world.
The Ocelot says: Vastly cut-down (no dancing Van Helsings here) adaptation from The Lincoln Company with Push To Shove Theatre Company that worked very well. A slender, long-fingered young Drac spidered and slinked around the space, seducing Lucy, Jonathan and Mina in quick succession. Somewhere between physical theatre and dance. Sensual, sexual and pretty to watch. 4/5

Comedy in the Dark
The Old Foundry Room @ Just the Tonic at The Community Project
At Comedy in the Dark, the audience's senses are heightened – things look and sound different in the dark.
The Ocelot says: Hmm. Not so good. Started 15 minutes late with no clear management of queuing or ticket-tearing. It was just standard stand-up sets, but in the dark, not specially-planned material which is funnier in the dark. The MC was not good at generating the right mood and managed to tell a gag in between sets that was so long and tedious that a snore-heckle from the back of the audience put him completely off.  Lloyd Griffiths choir singing and encyclopedic knowledge of Anglican cathedrals was the only high point. 2/5

What the Funk?
Emerald Theatre @ Greenside @ Nicolson Square
Do you know your Green Onions from your Uptown Funk? We got the funk and it’s all here, played by Scotland’s finest eight-piece live band, Lights Out by Nine. The story of funk evolves from the roots of Hammond organ, through bass and brass, to timeless club favourites from across the decades.
The Ocelot says: Groovy funk and soul from a bunch of old white blokes. The only problem was that we wanted to get up and dance but couldn't. Oh, and the young American lady introducing each funky factoid between songs seemed to stumble over her script a lot and mispronounced the names of Sam and Dave, the Isley Brothers and Stax. And some persistent feedback and video tech problems which need sorting. 4/5

Joke Thieves
Main Room @ Laughing Horse @ Cabaret Voltaire
Comedy set swapping live! The cult hit show where comedians perform their own jokes, then each other’s.
The Ocelot says: Not bad, though very much dependent on how each comedian chooses to riff on their randomly selected comedian's material. Lanky Anglo-Frenchman Eric Lampaert did the best, stripping and doing a rubbish impersonation of Welsh comedian Kiri Pritchard-McClean which was as much self-mockery as it was a roast. A Scottish woman's take on Finn Taylor was less successful - just a summary of his material with unfunny put-downs. 4/5

Dark North and Hungry Jane: Two Plays of Supernatural Horror
theSpace on Niddry St (Lower) @ theSpace on Niddry St
In Dark North, a television psychic discovers there are some spirits who should never be disturbed. In Hungry Jane, a woman, terrorised by the ghost of a young girl, enlists the help of her ghost-hunting former lover. Their troubles are just beginning…
The Ocelot says: The first tale from Slippery Rock Theatre was short but sweet with a spooky rocking chair and the ghost of a dead but very bitey baby. The second was too long and rambled with too many characters, although they were a good mix of the Addams family and the Endless. I liked the grumpy gothy girl. Dr Foot next to us slept through most of it - a reflection on his hard rock Fringe lifestyle more than the play though. 3/5

Quirky Incident
Had cheese sandwich and read comics in Greyfriars Kirkyard, but that's not the quirky incident. I was approached on no less than 5 occasions by different punters all over the city today, asking me for directions. This is a record even for me. Suspect my combination of faux-official lanyard, eye-catching purple jacket and commanding bearing just draws the lost and needy to me. Have so far directed people to Revolution bar on Chambers Street, the ticket office at Surgeons Hall and the toilets at C Nova. Come unto me and I shall guide you.

PS
Herself just reminded me that we went to a nice Bohemian art fair at Greyfriars, took photos of a cross-stitched Groot and shared a nice scone.
And we ended the night slumped in a big sofa at C Nova watching crappy short films. There was one about cloning General Franco I think, though I may have been hallucinating by then.