Celts
Exhibition Gallery 1 @ National Museum of Scotland
The idea of a shared Celtic heritage across ancient Europe retains a powerful hold over the popular imagination. But many ideas about the people known as Celts are more recent reimaginings, reinvented over the centuries.
The Ocelot says: Look, I like a good exhibition as much as the next person who likes exhibitions exactly the same amount as me, but do we really need to see 37 gold torcs and 53 silver brooch pins? I contend that we do not. Two or three gets the message across quite adequately. You could keep the rest safely locked up, or even flog them to the Chinese and free up more museum space for, I dunno, a celebration of Oor Wullie or something more interesting. I did like the wooden chariot though, and the silver Gundestrup cauldron. It was just like in Slaine. 3/5

Fête Worse Than Death
The Annexe @ Paradise in The Vault
Welcome to the village fête in Llanfairchwaraesboncen, nestled in the South Wales Valleys. Join your host, 76-year-old village busybody Eirys Evans, in a fun-filled romp complete with competitions, slide shows and audience participation.
The Ocelot says: Jolly good character comedy from Karen Sherrard on her first Fringe (we had a bit of a chat beforehand). She played a little old Welsh lady running a crappy village fete and the fete's star guest, not-Charlie-Dimmock lady gardener Esme de Flange, whose stream of relentless horticultural double-entendres was like a Viz strip come to life. Sadly I didn't win anything in the raffle. 4/5 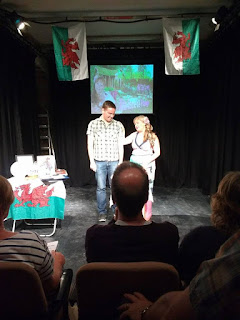 Etherwave: Adventures with the Theremin
Grassmarket 3 @ Sweet Grassmarket
Notorious performer Hypnotique tells her personal story about the world’s first electronic instrument (from 1920s Russia) and its influence on music today – including Led Zeppelin, Kraftwerk and Portishead. In this multimedia talk and music performance, expect tall tales of KGB espionage, spooky soundtracks and her encounters with Amazonians, Bob Moog and Simon Cowell.
The Ocelot says: The theremin's a weird instrument. Like the violin, if played badly it's a dire assault on the ears and the soul. Still and all, Miss Hypnotique puts on a most entertaining and educational hour about the invention and use of the peculiar electronic instrument. 3/5

Tom Neenan: Vaudeville
Buttercup @ Underbelly Med Quad
Backstage at the Vaudeville Theatre hear dark and hilarious tales of magic, malevolence and misfortune in this one-man portmanteau horror comedy from master storyteller, comedian and writer Tom Neenan.
The Ocelot says: Always a pleasure to see one-man maestro Tom Neenan put on another spoof, this time a riff on the portmanteau horror format like Dead of Night and Dr Terror's House of Horrors. I thought I would be safe on the front row with him, but sadly I was roped into a bit of audience participation, though just for a card trick (which was very well done). The high point for me were the three theatrical agents, played Macbeth-witch style by Tom and his two hands - all very Falsetto Sock Puppetty, which is no bad thing. 5/5

Marvellous Adventures of Mary Seacole
studio 2 @ C venues – C nova
The fascinating story of the Jamaican/Scottish woman who braved the Crimean War to tend to wounded soldiers, described as ‘a warm and successful physician, who doctors and cures all manner of men with extraordinary success’. We watch her progression from a child identifying medicinal herbs, to the horrors of war and epidemic when she entered Sevastopol.
The Ocelot says: Jolly fine life story of the lady in question by Cleo Sylvestre though I remain unconvinced that Seacole made any significant medical contribution, she was evidently a brave and kind woman. Well done to Cleo Sylvestre for doing the whole performance in full heavy Victorian frockage. 4/5

MMORPG Show
Ballroom @ Gilded Balloon at the Counting House
Combining improvised comedy with tabletop gaming in an epic, sprawling, open world, entirely made up fantasy quest of the audience's own devising. Every show is different. Every choice has a consequence, every success or failure decided by a large D20 (20-sided dice).
The Ocelot says: Paul Flannery of Knightmare Live fame stages a tabletop adventure for 3 'randomly selected' volunteers from the audience, and with silly suggestions from the rest of us, they attempt to roleplay and roll their way through a short quest. At least 2 of the 3 volunteers (bad luck CJ for coming second at Hungry Hungry Battle Hippos) have their own shows on here, including Erin McGathy from the Harmontown podcast. Only problem with this show is that I didn't completely enjoy it coz I secretly kinda wanted to be one of the three adventurers. 4/5

Tdipus Rex
Frooty Goose @ Platform 13
The classic Greek tragedy acted out entirely in dinosaur costumes. Betrayed by his best friend, in love with his mother and far from home, can Tdipus overcome close harmony Persians, Geordie harpies and Cyclops from the X-Men and save the day?
The Ocelot says: Of all the Greek sauropod dramas on at the Fringe, this is the best seen so far. The most memorable scene comes when the titular hero struggles to claw out his own eyes with his pathetically short arms. 3/5

Lady's Guide to the Art of Being a Wingman
Balcony @ Gilded Balloon Teviot
The Desperettes are girls dressed as boys, using techniques for picking up women to pick up men. Got it? Good!  Expect sharp comedy and tight harmonies as the girls defy gender singing a huge soundtrack of classic pop, including Destiny’s Child, Justin Timberlake and Salt’n’Pepa.
The Ocelot says: Slick comedy cover songs from three talented performers from Australia, dressed as Reservoir Dogs in pink beehives. Some light sauce and gentle audience interaction and a fine medley of ladypop singing. 4/5

Quirky Incident
Managed to lose something again. Again! This time it was my trusty dictaphone thing, with which Herself and I record our reviews post each show. This is a) to help me remember stuff for this here blog and b) to make us look sort of like gonzo journos in the hope that someone cool will want to talk to us. I can report that b) has not yet happened.
But on the plus side, I did find the dictaphone voice thing when I ran back into the Counting House and found it where it'd fallen out of my rubbish jeans pocket. Damn you, rubbish jeans and your shallow front pockets! I lost twentyfive quid out of you at Salute in April, but I was too ashamed to admit it publicly. UNTIL NOW.