The Chocolate Ocelot's 2016 Fringe - Day One

Welcome to the Ocelot's 2016 diary of the Edinburgh Fringe. This could well be my last year here coz by golly it's an expensive and tiring week, so by all rights I should go out with a bang and blog the crap out of this festival with funny photos, pithy captions and snarky reviews, but I'm going to try and actually enjoy the Fringe this year and not devote 50% of my brain to 'how can I most amusingly present this quirky incident in my blog?' while everyone else is simply enjoying the show/getting drunk/drunkenly spoiling the show.

So here's a few encapsulated reviews of the shows we've seen today, for your information and entertainment. As in previous years, I may have slipped in the odd fake show for my own amusement.

Oh, and I may mention the odd quirky incident after all, coz I can't put the obsessive compulsion to journalise my every waking moment completely to rest.

Darktales
Pleasance One @ Pleasance Courtyard
A horror-thriller guaranteed to send shivers up your spine, reveals a dark rivalry between two men who share a disturbing past which ties them inexorably together; but whose truth is more real?
The Ocelot says: Good twisty turny horror-story within horror-story play, with excellent shabby lecture room set. PC Dave Quinnan from The Bill (that is his full and legal name actually) was jolly good as the greying old prof. I recognise the female actor from somewhere and will clearly have to do some serious cybermining to figure out where I've seen her before. 4/5
.
.
.
Aha! Carrie Marx, for such is her name, was in Death Ship 666. Stamped and filed.

The Confessional
main house @ C venues – C too
Gripping police thriller that will raise your pulse as it draws you to the edge of your seat. Smash hit Fringe NYC production influenced by David Fincher’s Se7en from Beyond Broadway.
The Ocelot says: Gripping psychological police drama, if a little overlong at 1 hour and 45 minutes. Blair Gibson was especially good as the prissy killer Prentiss, though the burden of the play fell on director/leading man Michael Hill-Kirkland as the police detective. 4/5

Mosley Harmless
Frooty Goose @ Mulligan's Winery
One-man show. Challenges the reputation of one of the nation's most maligned 20th century figures in this sideways, often side-splitting, look at British fascism.
The Ocelot says: Surprisingly slapstick. I enjoyed the puppet show recreation of the Battle of Cable Street. 3/5

Will Seaward's Spooky Midnight Ghost Stories 3
Wee Room @ Gilded Balloon Teviot
Edinburgh's favourite ghost-flavoured comedy storytelling show is back for a third year! Huzzah! And this time it's spooky beyond all imagining! Join Will Seaward on the stroke of midnight for more fear than you can shake a werewolf at!
The Ocelot says: I have no idea what this show was like. Last year when we went, I feel asleep in the middle of the show. In the front row. Two feet in front of Will Seaward. This year I have been sensible and turned in relatively early (though see the quirky incident below). Herself gives it 5/5

Quirky incident
We got completely soaked legging it along Cowgate from the Pleasance to C Too in the middle of a typical Edinburgh summer monsoon. That's not the incident though. The incident was when I managed to lose my lovely set of laminated timetable cards (henceforth known as the 'lammies') along the way, a tragedy I only noticed some hours later down at the Gilded Balloon, as I was 'enjoying' a rapidly cooling £4 flesh-parcel, or 'crepe' as they are sold under.

So somewhat disconsolately, I bade Herself and CJ farewell and trudged back along the route we had taken earlier, my eyes trained on the pavement for the sight of four laminated cards and an evidently inefficient binding ring. No dice. I got all the way back to C Too (Columba's by the Castle) with not a sight of a scuffed white rectangle kicked into the gutter by Wee Bobby. C Too itself is all but dark and closed by then, save for a couple of young women who were taking tickets and running the snack bar earlier. They said hi. I sheepishly explained that I was 'uh, looking for some little laminated cards?' and they went 'oh!' and 'yes!' and 'wait here!'.

And wouldn't you know it, they had indeed found my precious lammies and had locked them safe in their little cabin where they do the snacks. Hurrah and calloo! I took a photo of them holding my lammies to celebrate. 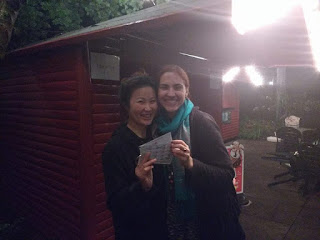 So thank you, Elizabeth and Kyoki (I think, sorry if I got your name wrong). You turned a bittersweet end to my first day here into an amusing and quirky incident with a happy ending. Kyoki even repaired the crappy binding ring with yellow tape, gawd bless her.