Some very personal and subjective gut feeling reviews of stuff what I've read.

The Wicked + The Divine 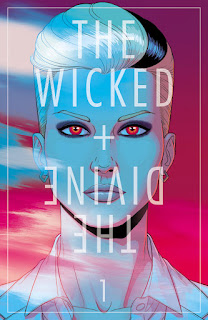 The comic is crammed full of the young, the smooth and the symmetrical, with copious pop music shout-outs, the Everyone's Bi trope cranked to the max, and of-the-now references to current social media fads that will quickly date this title.

If I had to encapsulate the comic in a single panel, it would be of a beautiful skinny androgyne posing in a nightclub proclaiming 'MySpace is Dead! SnapChat is Forever!'

Verdict: The Pretty + The Vacant.

Every Spidey that ever there was, in a bonkers story that spans alternate Earths. You want the Superior Spider-Man? You got him. You want Manga Spidey? Check. You want Peter Porker, the Spectacular Spider-Ham? He's right here.

Unfortunately you've also got silly old Morlun, a sort of spider-energy vampire in Hellfire Club drag, along with his lamoid family of forgettable psychos. In a comic chock full of guys in red, black and blue webbed costumes, it was the half-dozen Morlunites that I could never keep straight. 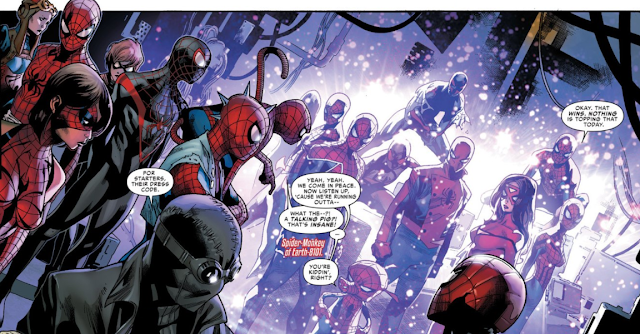 Nice little series showcasing what Clint Barton gets up to on those days when he's not running around shooting robots with the Avengers, and one that has been rightly praised for many factors. The character interplay, the dog, the sign-language, his neighbours, Barney; it's all good stuff.

I have sympathy for anyone who, like me, had to endure the erratic schedule of this 3-year series though. It's only 22 issues long, yet there was a 6-month gap between issues 20 and 21, and a further 5 months between 21 and the final issue. In a simpler series, that might not have been a problem, but Hawkeye had numerous plot lines and time-jumps, which made picking the story up again near impossible.

One final tip. While I like the Kate Bishop in LA issues, they're a different beast altogether. I'd recommend skipping 'em and sticking to the Clint in New York storyline, then going back for Kate later. 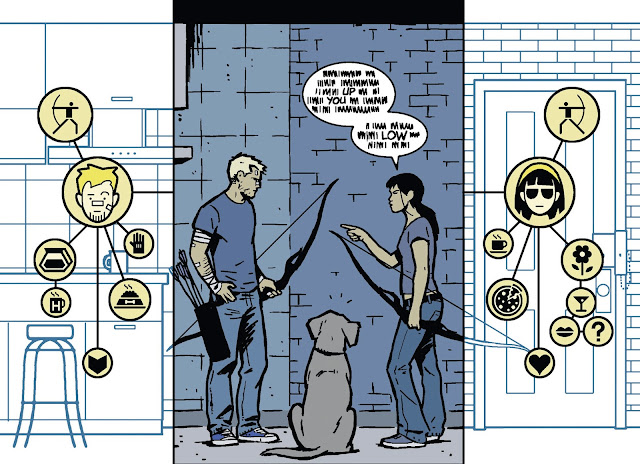 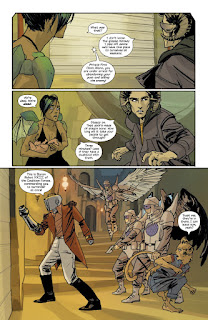 And the silly, silly aliens. Staples often simply draws regular 21st century humans in contemporary clothes, but with horns or wings. And those TV-head aliens! They visually strike a bum satirical note in a series which is gritty/soapy.

Verdict: Not as good as everyone says it is. 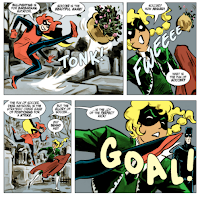 Verdict: A welcome upbeat antidote to...

The downbeat saga of a near personality-free nobody and the reunion with his deadbeat dad. Once I'd got to the very useful Story So Far double-page spread about 50 pages in, it made a lot more sense. There are also some nice pictographics throughout.

I liked the flashbacks to Jimmy's grandfather (and confusingly, his double) as a child at the Chicago World's Fair, as well as the funny/sad cartoon on the back cover (the tale of an unloved and unbought copy of this very book). But on the whole this is an exercise in depression and bleakness.

Verdict: Only to be read if you are a stranger to the black dog. 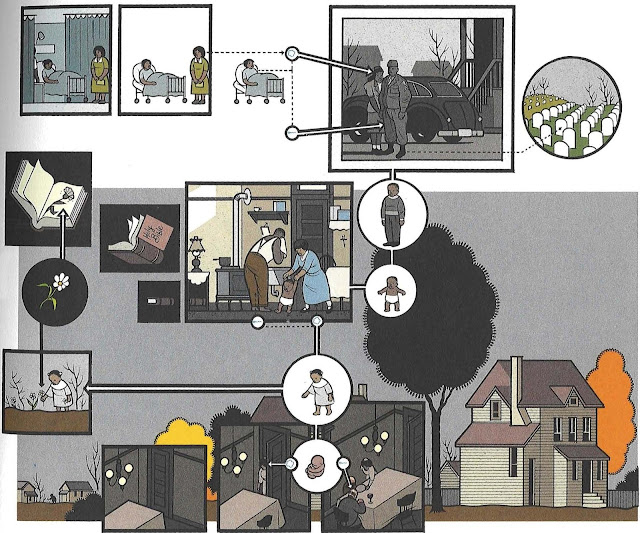 Not what I expected (I thought it was a sci-fi space adventure from the title). Quite liked the freaky naked grinny-mouthed giants, but it is quite hard for a Western reader to remember to read the entire thing, including the order of the speech balloons in each panel, from right to left. Very Japanese, with way too much (clumsily translated) dialogue.

Reading tip: spend no more than 3 seconds on each page. Reading it at speed, especially action chapters like volume 2, lends pace even if there are pages and pages of angsting kids shouting oddly at each while Giant Grinny Nudists are eating people outside.

Verdict: Give the animated version a go instead. 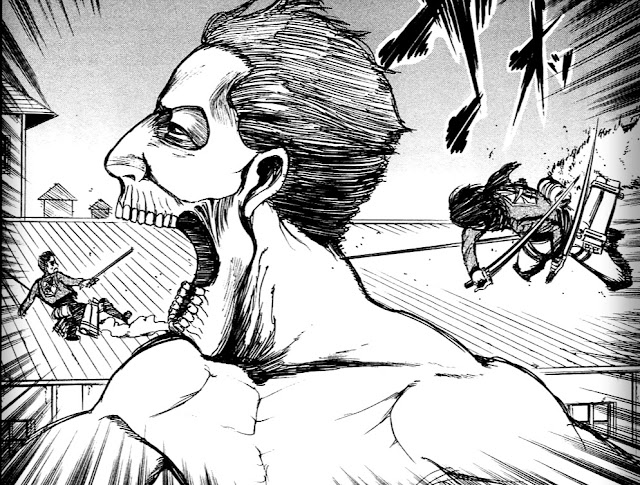 
For almost 130 years, Sir Arthur Conan Doyle's famous detective has captured the imagination of audiences in print, on the airwaves and on screen. Presented here are - however improbable - some curious footnotes in the history of Mr Sherlock Holmes.

The Baker Street Irregulars, a gang of street urchins who made several appearances in Holmes' adventures, were originally inspired by the cheeky hi-jinks of a troupe of child performers in London's music halls. Among them was one Charlie Chaplin, whose costume of rumpled, oversized clothes and clown-like but indefatigable persona were to form the basis of the Irregulars' young leader Wiggins.

It's Good, But It's Not Right 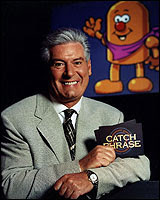 Holmes' catchphrase in response to his associate Dr Watson's exclamations of awe at his deductive prowess went through several versions before settling on 'Elementary, my dear Watson'. Here are a few examples from Conan Doyle's early submissions to The Strand magazine:

Adolf Hitler was purportedly an incurable Holmes fan, going so far as to view reels of Basil Rathbone movies in the private screening room of his Wolf's Lair. When Sherlock Holmes and the Voice of Terror came out with its strong anti-Nazi message, Hitler was incandescent with rage and immediately ordered propaganda minister Joseph Goebbels to produce his own Aryan version of Holmes on screen, one which would espouse strong National-Socialist values.

The result, Sherlok Holmes und das Geheimnis des bayerischen Forellen, was screened to Panzer crews before the Battle of the Bulge, but was said to be so laughably bad that it was never shown again, with all existing prints subsequently burnt or else impounded by the Soviets after the war.


The Affair of the Pimlico Pigeon Fancier 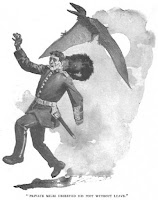 In his later years, Conan Doyle struggled to capture the magic of those early Holmes stories, and began experimenting with ever more unlikely scenarios, such as the use of monkey glands in The Adventure of the Creeping Man. An even more improbable tale was The Affair of the Pimlico Pigeon Fancier, where the culprit in a series of seemingly impossible rooftop robberies is found to be a not-so extinct pterodactyl, in an unofficial crossover with the author's own The Lost World.

A staunch believer in metaphysical phenomena such as the Cottingley Fairies, the writer was said to be working an even more fantastical adventure for his most famous character at the time of his death, His Master Stroke, in which the now-retired detective uncovers the incredible truth behind the strange disturbances around his precious beehives.

Like any popular work of fiction, Sherlock Holmes has been endlessly revisited, reimagined and spoofed, from early Ellie Norwood to classic Rathbone and Cushing, from the teenaged Rowe to the sepulchral Brett, from two-fisted Downey to the ethereal Cumberbatch. Here are three less well-known adaptations of the consulting detective mythos:

Five Batshit Things You Never Knew About Doctor Who


Consider yourself an expert on all matters Gallifreyan? Take a look at these barely credible 'facts of Who-bris'.

When plans were afoot to bring back the malevolent Master during Tom Baker's run, the popularity of the Doctor's robotic companion K-9 prompted the BBC to draw up designs for the villain's own metallic 'pet'! Prime-8 was intended to be 'a sinister robot gorilla, capable of menacing the Doctor and his companions or guarding the Master while he carries out his evil plans'.

A prototype radio-controlled Prime-8 was built but proved too bulky and 'bloody silly-looking' according to one insider, so the idea was shelved. Prime-8 was later sold off to ITV, where he finally made it on to our television screens as Metal Mickey. 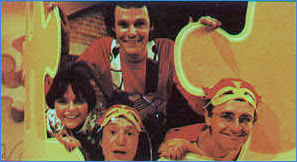 Like many Who regulars, Sylvester McCoy actually had a small cameo part in an earlier story before securing the role of the Seventh Doctor. In his case, it was the dialogueless but crucial role of the deadly Raston Warrior Robot in The Five Doctors, where McCoy's slender, athletic frame was put to good use, jumping around a quarry and shooting spikes into Cybermen.

The former O-Man Big off of Jigsaw is said to have clinched the part of the Raston, ahead of Wayne Sleep and the man who played Mr Claypole in Rentaghost, by turning up to the audition already clad in his own silver leotard. 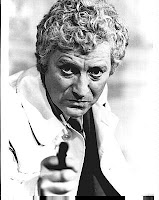 The Doctor Who team had to act quickly when Jon Pertwee fell victim to a nasty skin rash during the filming of The Curse of Peladon; the infection subsequently attributed to the 'manky old fur coats' that had been used to create the beast Aggedor. With a tight shooting schedule but no Doctor, they scrambled to work around his absence, ultimately resorting to recasting him with lookalike actor Barry 'Van Der Valk' Foster.

Despite Foster's physical resemblance to Pertwee and eagerness to embrace the physical requirements of the role, BBC executives were uneasy with the hastily rewritten script of The Sea Devils, in which the Doctor declares to Jo Grant that a chance neutron discharge from the TARDIS console has caused his facial molecules to 'temporarily freak out', and instead chose to wait until Pertwee was well enough to continue in the role. Unaired footage of the infamous Foster episode of The Sea Devils has never been seen by the public. 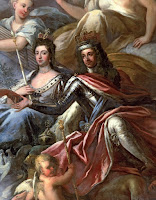 Staying true to Doctor Who's original historical/educational remit, this First Doctor story was to have landed William Hartnell's timelord and companions Ben and Polly at the court of William III and Mary II of England in the last years of the 17th century.

The main plotline would involve the Doctor being mistaken for a leading Whig pushing to ratify the Bill of Rights, while Ben and Polly would become bound up in the drafting of the Stamp Duty laws and founding of the Bank of England respectively. Produce Verity Lambert took one look at the script, declared it to be 'even duller than Marco Polo', and ordered that it be replaced by 'something with space people'.

Nativity of the Daleks 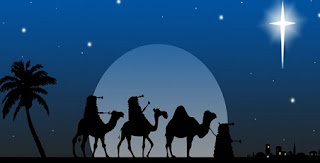 Hitch Hikers Guide to the Galaxy writer Douglas Adams famously contributed three stories to Doctor Who: The Pirate Planet, City of Death and Shada, the final remaining incomplete due to industrial action. But rumours persist of a secret cache of unseen scripts from the great man, hidden somewhere in Britain but locatable by studying certain hidden clues in his published Who works.

Among them is said to be Nativity of the Daleks, a Christmas-themed story in which the Doctor discovers his perennial nemeses using Skaro's Book of Exterminus to meddle with Earth history in first century Galilee. Having engineered the creation of Dalek Jesus, His Holiness Pope Davros revels in triumph but his plan is ultimately undone when the Doctor travels back in time and bombards the Three Wise Daleks with the reverse-polarity chords he has inserted into Slade's Merry Xmas Everybody.