The Book of Revelations (revised)


It is a common mistake in period dramas, especially noticeable in those set within living memory, to dress every character in the archetypal fashions of that era. Life On Mars for example, set in the early 70s, ensured that absolutely every male character sported massively wide shirtcollars, fuzzy sidies or flappy flares. Ditto Ashes To Ashes, where every female character looked like they should have been supplying vocals for The Human League. But real people aren’t like that. We stick with what we like, and wear what we’re used to. Only the young and the vapid actually dress according the diktats of the fashionistas of the age. The rest of us drag our (platform / flat / spiky) heels until wear ‘n’ tear or peer pressure behove us to trade in the old and comfortable for the new and on-trend.

So it was for me in the mid 90s, when the jovial bartender at London’s Comedy Store remarked that my sports jacket with rolled up sleeves was indeed, so 80s. Mortified that I had evidently failed to read the government pamphlet issued to all households on December the 31st 1989 that the Miami Vice look was ‘right out’, I sheepishly rolled down my sleeves, binned my espadrilles, and started shopping for acid t-shirts.

As in fashion, so in television. Tedious Top 100 list retrospectives tend to assume that if you were of a certain age at a certain time, you had to be into whatever was the most popular show going. It is for example, heresy to say you just didn’t like Monty Python or Fawlty Towers (unless you’re my mum - she's always hated 'em), and for my generation the same went for The Young Ones. But being as we were a one TV-household at the time, the chances of my asserting a tentative viewing preference over those of the parents were minimal. Not for me the rebellious 'I Want To Watch It And You Can’t Stop Me' histrionics of many an adolescent drama. Sensing the obvious disapproval of the family elders for the rabid antics of the goggling Rik Mayall and his chums, I don’t think I ever got further than accidentally leaving the TV on BBC2 for a couple of seconds into the announcers “And now…” link before it got switched over to The Nine O’Clock News.

So I had literally no idea what the rest of the kids at school were talking about the next day, though I surmised from their enthusiastic re-enactments that it had something to do with beating up a long-haired hippy quite a lot. Interestingly, the same went for Top Of The Pops. It was slightly disapproved of in our house, so I never really made an effort to watch it. Consequently I had no idea who any of the pop bands in the 80s were, let alone looked like. Teenage discos were a puzzle to me – I had no mental image of who any the bands being played were, with the obvious exception of Boy George, I think. To this day, I can’t tell Depeche Mode, Tears For Fears and Spandau Ballet apart.

I know, tragic isn’t it? I’m thinking of writing one of those awful ‘childhood suffering’ autobiographies about the hardships of growing up not being able to differentiate between Martin Kemp and… whoever was in those other bands. I’ve just looked them up on Google – the names and faces mean absolutely nothing to me.

Of course all that changed with the twin advents of the family's new portable telly and my Greatest Hits Of 1988 double cassette album, but that’s a story for another time.

We don’t all slavishly follow the Number One trends of our time. Some of us do of course – we call them The Majority and are happy to leave them to their weekly diet of Downton Abbey / Strictly / Mastercock like cheap Victory Gin while we nonconformists cheerfully snipe from the sidelines and pretend not to feel left out.

On the other hand, I do like Christmas Comedy Cash-In books. You know what they are – sort of annuals for adults, usually based around whichever comedy series was popular on TV 18 months previously. The book's then released to squeeze the last drop of funny from comic performers who have already struggled to eke out 90 minutes’ worth of on-stage material (honed over 10 years on the club circuit) into a couple of 8-episode series on BBC2. The last proponents of this were, I think, That Mitchell and Webb Look and then The Mighty Boosh a couple of years ago, but there’s only so many of Noel Fielding’s spastic finger paintings that you can pad a  Christmas annual with before the punter starts to feel ripped off and slightly hallucinatory.

I recall a particular series of Christmas Comedy Cash-In books that came out between 1986 and 1990 and were all called How To Be (something). They were written by a couple of chaps called Mark Leigh and Mike Lepine. Or that might be Mike Leigh the acclaimed film-maker and habitual employer of Alison Steadman and Jim Broadbent. I forget. The first in the How To Be series were clearly designed to cash in on the success of stars of The Young Ones, featuring Ade Edmonson of the cover of How To Be A Complete Bastard, and Rik Mayall on How To Be A Complete B’Stard. Neither interested me as I had long since adopted the disapproving non-Young Ones stance of the older generation.

But then Leigh and Lepine brought out a couple of less blatantly cashy-in (that's a word) books - How To Be A Superhero and The Book Of Revelations. Since these ones seemed to bear no obvious affiliation with the aforementioned unmutual BBC2 sitcommery, they duly ended up in my Christmas pillowcase on consecutive December the 25th mornings. The Superhero book was a tour de force if, like me, you were a) totally in love with superhero comics, b) between the ages of 16 and 25 and c) a recent convert to the ‘shit & bollocks’ comedy of adult comic Viz. If you didn’t fit this particular niche demographic, you probably thought it was just stupid. (And it also featured art by one Mr Steve Dillon, who you may recall I would go on to provide comical dialogue for, unbeknownst to him.)

The Book of Revelations on the other hand, had a far broader appeal, featuring as it did, Adolf Hitler doing a balloon dance on the cover. A sure-fire way to attract the widest possible audience in our Nazis-and-smut obsessed society. The book contained a scattershot offering of ‘recently discovered revelations’ about all sorts of things: why the dinosaurs really died out (they all turned gay), a Black Death awareness poster in the style of the original AIDS: Don't die of ignorance campaign (featuring a fetching leech illustration), and a bizarre letter from Ugandan dictator Idi Amin to the authors written in pencil.

One of my particular favourites was Peter Rabbit, Tank Killer, a supposedly lost draft for a reworking of the much loved Beatrix Potter character by popular WWII fiction writer Sven Hassel. The artwork alone was bang on. 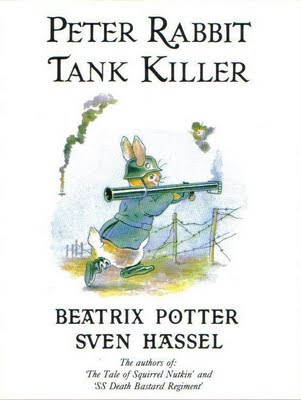 I’ve been a fan of this sort of stuff (Parody? Pastiche? Piss-take?) ever since, and was put in mind of The Book Of Revelations quite recently when watching one of BBC1 Breakfast Time's "It’s almost 9:00 am, so let’s pad the remainder of the programme with some popular entertainment segments". In this particular instance, two absurd media-twats were discussing how Picasso-inspired porcine Peppa Pig and her worryingly-stubbled father were about to break into American television. One of the media-twats was banging on about the Peppa Pig ‘brand’ and mentioned a couple of other childrens’ shows in the same vein.

But he must have been nervous (or coked off his face) when he gabbled the programme names out, because he got one a bit wrong, and it got me to thinking what that particular childrens’ television programme would be like if the all-important word ‘Engine’ were indeed dropped from the title. And so boys and girls, I bring you an excerpt from that well-loved CBeebies staple, Thomas The Tank. 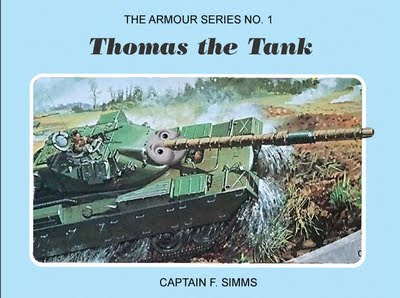 "Ho ho!" chortled Thomas as he trundled into the bombed-out town. "I'll show that lot at the base what a real tank can do!"

And with that he spun left on his tracks and brought his 120mm main gun round to cover the town square. The shattered remnants of a fountain gurgled away in the centre as Thomas advanced to a commanding position in front of a pretty little post office.

All at once, bullets began to ping and spang at his bodywork. Thomas gasped at first, but then chuckled as he realised that the light small arms fire could do little to penetrate his 38mm hull armour.

"Oh no!" went the enemy soldiers as they saw their mistake. And "Aiee!" as the cheeky Chieftain swivelled his cupola-mounted 7.62 machine gun to face them.

Brrrp! Brrrp! chattered Thomas' secondary armament as he mowed the hostiles down.

"I'd like to see Gordon do that!" he chirped, thinking of the grumpy Centurion. "As soon as the Fat Commander hears that I've taken the town ahead of the main battle group, he's sure to make me lead tank!"

But in his excitement Thomas had forgotten to pay attention to the flanking approaches. Too late, he heard the distinctive grind and grumble of a powerful Maybach gasoline engine getting closer and closer. And sure enough, from across the town square the long nose and Henschel turret of Helmut the Tiger Tank could be seen sticking out round the corner of a gutted bakery!

"Foolish little tank!" boomed the fearsome Panzerkampfwagen. "Your modest hull armour is no match for my PzGr armour-piercing shells!"

"Crikey, I'm done for now!" gulped Thomas as he desperately throttled his Leyland L60 engine to full power and tried to bring his heavy frontal glacis plating round to face the powerful Panzer. "If only I hadn't been in such a hurry to show off in front of Matilda!"

I could go on in that vein. Quite possibly forever.

I think the toy and merchandising potential here is enormous, though I suspect it would not go down a storm with the likes of mumsnet, which is a pity.

Hi Jack. I didn't even get round to showing you some of Thomas' friends, like Churchill the flame-throwing tank, and Mark the old WWI tank. I'll save them for the animated series...

As for living-dead literature, I can recommend Zombieslayer by Nathan Long, for all your crazed-dwarf-warrior-versus-undead-horde needs.

He's called Thomas y Tank in Welsh I believe, or so the little boy who lived next door to the place we used to stay on holiday used so say.

Peppa Pig is both annoying and genius. You hear of so many kids programmes "oh *snort guffaw* it's so above kids, so many in jokes for adults" when what they mean is there are a few not very clever nods to old films. At times Peppa Pig stares you in the face and then mocks you for breeding "You'e a parent... ? Hahahahahahaha! " it screams like the chimp-McGoohan at the end of The Prisoner, the effect is both comforting and soul destroying.

I am so looking forward to that. I guarantee that that would be a huge success on line. Albeit a financially crippling one for you as the inevitable lawsuits begin and the daily mails reactionary hatred is poured out.

I have never shied away from taking easy pot-shots at well-loved children's programmes and have no intention of stopping. Until someone tells me off.

Speaking of Peppa Pig, have you seen that other kiddiepig show, Olivia?
http://www.babble.com/CS/blogs/strollerderby/2009/01/OliviaFamily.jpg
I find the Pez-dispensery bite radius of Olivia and her kind quite threatening.