Do you know what really bugs me? A personal appeal from Wikipedia founder Jimmy Wales. That stupid banner takes up half my laptop screen with his stupid beardy face and sparkly crinkly eyes looking like he's about to cry. Has anyone actually clicked on it? Yeah, yeah, it's probably a request for donations or something, I get that. But still, it's gumming up my Wikipedia use, dammit. So if somebody could please just click on the appeal, send Jimmy a large amount of money and get him to take his whiny-assed appeal somewhere else, I'd be terribly grateful.

Do you know what else annoys me? Websites that demand ever more abstruse password protocols. It's got me so annoyed that I've used the word abstruse without even bothering to check what it means. It could mean 'the act of squeezing one's buttocks far too hard' for all I know. I just don't care anymore. But it just bugs me that just when I've managed to get all my secure logons to use the same password (yes, yes - I know...) 'made up of at least nine characters, one of which must be numeric', some new-fangled johnny logon pops up and says my password must now have two numerics, or one upper-case character, or two numerics AND one upper-case character. I mean, Gordon H. Bennett, how'm I supposed to keep track of which sites use which password? Good thing I have them all written down in a secret blog in tiny invisible letters...

But here's what's really, really getting my goat right now, and not just getting my goat - it's jolly well laying a cunning trap with an attractive lady-goat doll ('Realistic Udders!'), bashing it over the head with a frozen chicken, driving it to Land's End and throwing my goat in the sea - what's getting it, right, is bloody platform games. Yeah, topical eh? Oh yeah.

Ok, so picture the scene: it is 1984. You have a BBC microcomputer, not a pikey Spectrum, coz your parents have aspirations for you, and you're playing this game. It is called Frak! In Frak! you control Trogg, a caveman armed with a yo-yo (obviously), whose mission is to run, jump and climb along a sidways-scrolling world, populated (as far as I recall) solely by Big Freak Pink Things perched on platforms suspended in an endless cyan limbo. It's a bit like how Steve Ditko drew the Dark Dimension of the Dread Dormammu: 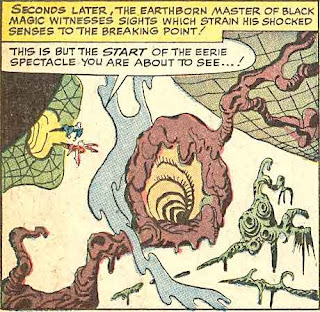 Perhaps it is an homage. Perhaps not. No matter.

Anyway, despite Frak!'s clearly rich storyline and immersive characters, it used to wind a fifteen-year old Yours Truly right up. Why? Because in order to get Trogg from Point A (the left hand side of the screen) to Point B (the right hand side), you had to get him to run and jump just so, with absolutely no margin for error. Sometimes you had to edge him pixel by pixel right to the edge of a floating platform before pressing Right Arrow + Space at exactly the same time, or by Hoggoth, he'd plummet to a sanity-defying doom somewhere in the bright blue depths off the bottom of the screen. I mean, you had to have the coordination of a microsurgeon with the hands of a blind hairdresser to complete the bloody game. Ooo, it made me mad.

And Frak! was far from an rarity. Every other game in those days was a platform game (they're probably called platformers these days, but I'm old and rarely watch those 'We got an improbably hot young lady to review Assassin's Cry Of Honor for you' television programmes that seem to crop up on Channel Five of a morning). I seem to recall Killer Gorilla (the Beeb's copyright-dodging version of Donkey Kong) and Manic Miner being particularly demanding in the hand-eye coordination area. And these were the days when you generally just got three lives and then you had to start all over again. From the beginning! No namby-pamby 'Just keep on respawning and replaying until you pass out from lack of food or have to jump up with a cramp in your foot' modern games, oh no.

Bloody annoying, that's what they were. I never did get Miner Willy past Eugene's Lair and his predatory, roving khazies:

Sooo, fast forward twenty five mother-loving years to 2010. In a moment of incaution, a far older (and prettier) Yours Truly wanders into an HMV shop unchaperoned, and a wouldn't you know it, a copy of Batman: The Brave And The Bold (for the Wii) leaps into my hand, just as my debit card leaps onto the cashier's counter. That's just how it happened. How could I resist? It looks just like the recent cartoon of the same name, has simple, well-rendered graphics (do we still call them graphics?) and bears the following promise 'Play through the exciting terrain of the DC Universe in this side-scrolling action thrill ride as you solve puzzles, fight dozens of foes, discover new foes, save the day and see if you truly have what it takes to be a superhero!'

And you can summon Aquaman to make a subsea whale attack - what's not to love?

(As far as I can tell this isn't actually a scene from the game, but hey - it's got Plastic Man and Gorilla Grodd in his special mento-hat!).

The first level of the game's great - you play Batman and/or Robin as they punch, jump and swing through a sideways-scrolling Gotham City, hot on the heels of an unidentified cat-themed villain. And the best bit? Every time the Caped Crusaders get to an obstacle they can't jump over, like a yawning chasm between rooftops, all you have to do is press the '-' button and they automatically throw out a grappling Bat-Line and swing across. Which is very cool. You get all the grooviness of Batman navigating across a dizzyingly vertiginous cityscape, and none of the fiddliness of pressing Forward ('Right on your Wii nunchuk') and Jump ('the B button on your Wiimote') at just the right time in just the right spot. That would be madness, of course; an irksome nigglance that we have long since abandoned to the back room of gaming history.

Until we get to the second level, and I'm playing Blue Beetle with his cute little flappy beetle wings. Surely he should be able to make any leap that Batman can make with his Bat-Line? Apparently not. Poor Blue Beetle - how often did he fail to make the all important leap up the cliffs of Science Island in pursuit of Grodd's rogue primates? Too bloody often, that's how often. Ditto Hawkman in level three (honestly, who decided to put Hawkman - a man with whacking great hawk wings on his back - in the level set almost entirely in underground tunnels? Tch.) and even more so with Green Lantern in level four - there are whole sections of this one where you have to run and bloody jump just right to clamber up platform after misbegotten platform. And to add insult to injury, they take Batman's Bat-Line away and give him some lame-ass Bat-Wings that allegedly enable to him to jump further. Allegedly.

Holy retro-gaming conundrum, Batman - all I want to do is play a nice simple game with pretty pictures and not too many controls. Something that plays to my gaming strengths (i.e. hammering the attack button continuously for two to three hours). But instead I've been sold Bat-Frak! The 25th Anniversary Edition. And he doesn't even have a yo-yo.
at 10:32 No comments: