Here's something that annoys me: novelty Google banners these days. Like today, it's Robert Louis Stevenson's birthday, but the banner in no way represents a cunningly Stevensonised version of the letters G O O G L E. Oh no, not these days. Now it's just a long picture of pirates 'n' shit. Okay, so the compass symbol could pass for an O, but no way is Long John Silver there on the left a G, not to mention the cliffs, the ship and pile o' treasure. They're just taking the piss now. They're like "Oh, we're Google, everyone knows that we usually put the word Google in the middle of the screen. We can just put what the hell we like there now and everyone will still know what it means. We could stick up a plate of spaghetti, a dead cat, Anthony Eden, a map of Namibia, a helium atom and a green lobster, and they'd still be OK with it. We rule the world. Nobody uses Yahoo anymore anyway."

Well that's what I think.

You should know that I've just finished squeezing soap bits. I'm sure you know what I mean by that - those skinny slivers of handsoap (for those of you who haven't switched over to pump-action space goo) that are too small to use on their own anymore, so you end up trying to squish them in with all the other older soap bits that you've prepared earlier, in the hope of fusing them into one mega-combo-soap-zord. Doubtless other people just throw their slivers away, or else actually manage to use them up individually - massaging each mono-filament soaplet into their hands/body/companion with a manual skill I just don't possess. At any rate, I was just now squeezing soap bits together in one fist, really bearing down on those mothers, and when I released my grip, they were all squooshed into one. It was just like when young Clark Kent compressed a lump of coal into a diamond. Just like it. I just thought you ought to know that that is how I roll.

And to prove I am an adept multi-tasker, you should also know that not only am I typing this here article, I'm also dunking as many digestives as I can before Herself gets back home and admonishes me for ruining my diet (again), and I'm running an ohrwurm of a tune constantly through my head on an infinite loop. Said tune is a variation on Ronnie Hazlehurst's timeless 'Blankety Blank' theme tune, but instead substitutes the name 'Bethany Black', a comedian I saw last night. She said I'd be humming her name all the next day, and she was right. Actually, here in my head it keeps sliding into 'My United States Of Whatever' and Eminem's 'Without Me'. It's quite the mash-up you know. Now would be an ideal time for me to commit a crime and then undergo questioning by telepathic police. They'd get nothing.

And another thing - I had my nails redone yesterday and I've just realised that the colour I chose is exactly the same as my new(ish) car, Elwood. Holy serendipitous silicon gel, Bruce. I think this is rather cool, though many may see it as hopelessly sad. Those critics would doubtless have felt justified had they seen me in the car park half an hour ago, holding my hand palm down against the driver's door, admiring the chameleon-like blending of nail into bodywork. I felt like some kind of Transformer. Does this edge me into Legally Blonde chihuahua-in-a-handbag everything-must-coordinate territory, or is the fact that I colour-matched against a blood red Chrysler that looks like it was left over from the set of American Graffiti nudge me into some sort of blokey car obsessed midlife crisis zone? I am, as ever, a bit confused.

Here's a thing - why am I unable to resist the siren call of an 'Updates Available' icon on my desktop? That little yellow shield's been staring up at me from the bottom right hand corner of the screen for the last 15 minutes, but I've finally given in and clicked on 'Express Install'. Look at my poor old hard drive thrash away. That's my fault that is. I couldn't wait.


Anyhows, there was something I was going to tell you about today, and that's my trip to the tanning place. I say 'tanning place' but it's actually a beauty salon that happens to have a couple of ultraviolet light tanning booths; one stand-up (like the Quantum Leap accelerator) and one lie-down (like a hyper-sleep chamber from a deep-space adventure fillum). Said tanning place is manned at all times by one or two dolls. Dolled by one or two dolls, I suppose. The dolls are young, female, skinny, mahogany hued, blonde, oh so blonde, and adorned with eyelashes the weight and density of fruitbat wings. It can be quite intimidating to slob in there with no make-up and hair waging its usual civil war between the straw-like split ends and the greasy roots, laden down by a collapsing third-time round Tesco's plastic bag, only to be greeted by one or both of these brown and yellow fembots, wafting the air into my lumpen face every time they blink.

As usual, signing in at the tanning place includes me lying about using some sort of 'special cream' that they banged on about when I first went in there. Nowhere else goes on about special cream, so I suspect it's a little money spinner they've come up with, if they can gull the customers into shelling out for some sort of exotic guava-jollop to enhance the natural bronzing effect of two-dozen megawatt purple tubes blazing away at your naked flesh from a distance of 6 inches. Not me though - I just smile, pat my bag suggestively and mumble that I've brought my own. I shall develop my melanomas at my own pace, thank you very much.

Thence to the lie-down tanny capsule thing. First off, it's in a sealed room. You'd expect it to be in a room of course, not alongside the people getting their nails done, but I mean that the room itself is sealed, in some sort of air-pressurey, eerie whistling noise, can't-open-the-door sort of way. I think it's something to do with the extractor fan or the cooling unit from the lie-down capsule thingy. But it's a bit weird all the same. You can hardly wrench the door open while the fan's going, which would make it a good place to trap a particularly feeble vampire, I suppose.

The capsule itself, unlike most others I've used, is contoured to the shape of the human body, not flat as a board. This may sound great at first, but there are a couple of problemettes. The first is that it's bloody hard to climb into, coz you have to sort of roll into it and down into the depression all in one go without bashing your head on the enormous coffin-like lid that never opens up enough. It's even worse trying to get out afterwards and can be a little panicky, but this may be because I have enfeebled limbs from years of steadfast and regular non-exercise.

The second problemette is actually quite fun but a little naughty. I discovered, quite by accident mark you, that you can make the most amazing backfarts by raising and lowering one's body off and back down onto the contoured surface of the tanning capsule thingy. It must be the concave shape of the capsule. Or else my flabby and enfatulated back. Whatever the acoustic causes of this phenomenon, the sound is really quite remarkable. I'd liken it to a copulating hippopotamus. Disgusting you might say, but think on: that regular raising and lowering motion is doing wonders for my lower abdominals and general core stability. It's like my very Ab Circle Pro(tm).

Before we leave the tanning place, I'd like to draw your attention to one final thing. It's a poster on the wall of the worryingly airtight tanning room. The poster was issued by Eye Pro, the makers of the hilarious little tin foil stickers known as Wink-Ease that you can use in place of protective goggles whilst undergoing the ultraviolet treatment. The poster is one of those health and safety jobs, warning of the dangers of unprotected eyes being exposed to UV, or of using contaminated eye-protection (manky Wink-Eases I imagine). I borrowed Herself's digital camera so I could show you a bit of the poster. This is conjunctivitis or pink eye: 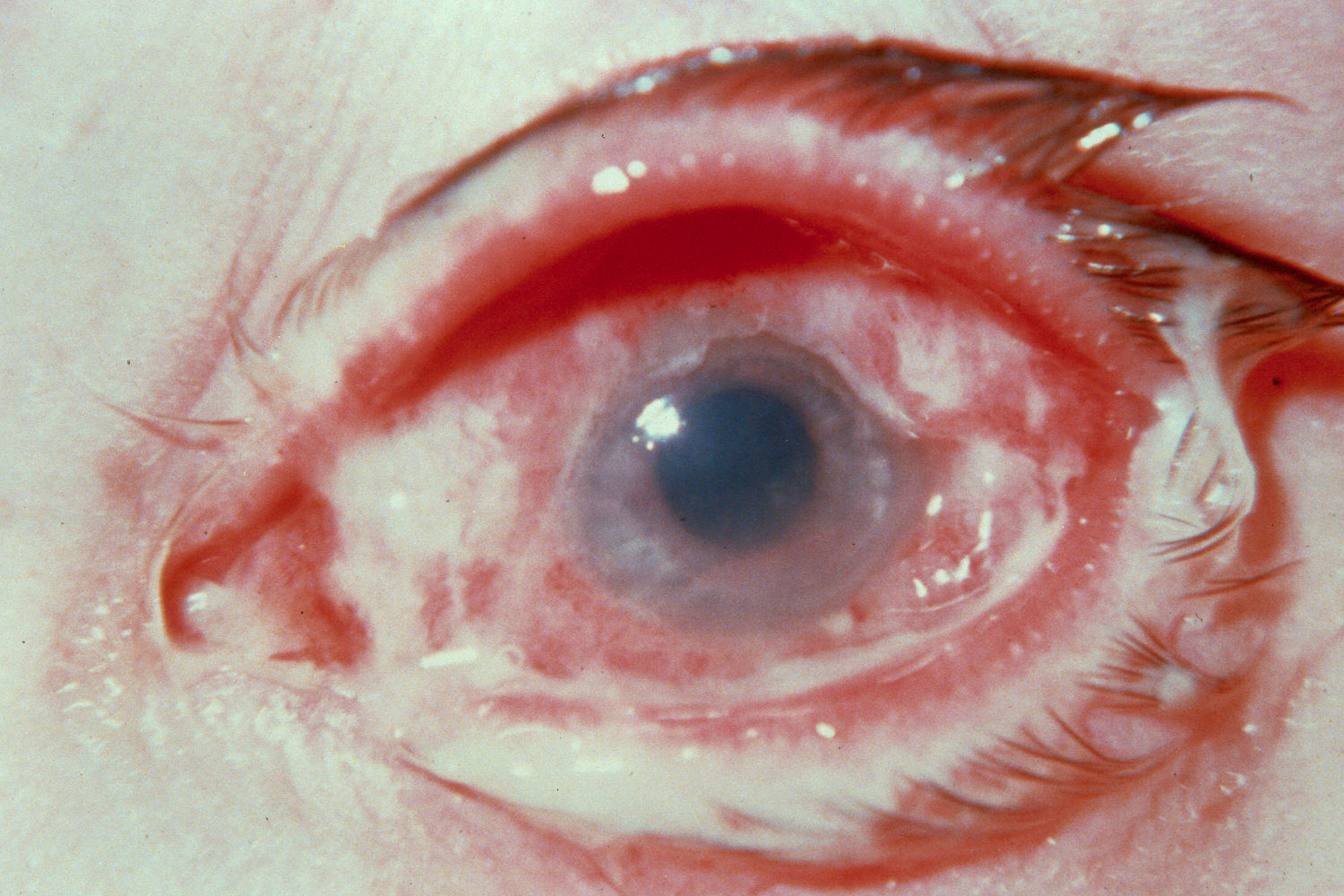 Great Krypton, is that horrific or what? Put me right off my digestives, I can tell you. It's odd to see such outright foulness in a place dedicated to beautification and the employment of bat-lashed dolls, but I guess they're obliged to warn you of the dangers.

I wonder what the rest of the person's face is like? It might be quite pretty. They might be smiling ruefully at their foolish snubbing of the eye-safety guidelines. They might have really good hair to make up for the ocular horror betwixt nose and ear. We shall never know. I am minded, and I believe I am one of the few people living still to be minded of anything, of those other health and safety posters we've probably all seen over the years - leprous feet on the chiropodist's wall, receding gums on the dentist's wall, possibly snaggled genitals on the fertility clinic walls, I don't know. But wouldn't it be great to collect all those posters together into a catalogue of medical horrors? Splendidly Victorian. I'd like to pick out all the really ghastly body parts from each poster, and then photoshop them all together into one supremely ruined body. Blasphemy, you say? No, science!

(Be grateful I resisted the urge to blurt out She's alive! Ah, too late.)

As a general rule I don't like to comment on blogs for fear of exposing my weaknesses or saying something silly.

However whilst eating my pork belly dinner today I scrolled down your blog and was greeted by a vision worse than the eye of Sauron and Moby Dick combined.

As I lose appetite I thank you.